Designed for the Canadian Winter

Over at Pie Palace, the esteemed Erigami Scholey-Fuller asks why we don’t have more things designed for the realities of the Canadian climate:

Winter plays a huge part of our identity. Canadians snowshow, snowboard, ski, skate, and skidoo. We invented hockey. We dominate the sport of curling. We essentially invented the modern ski resort. In the temperate south of the country, we endure subzero temperatures five to six months of the year.

But our consumer goods, our clothing styles, architectural styles, and fetish objects are designed elsewhere. We use stuff designed in climates where zero is considered cold, and a light dusting of snow will close a city. 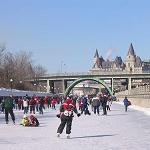 I can think of a few exceptions, like the ubiquitous Uggs and fur-hooded parkas, but for the most part, he’s right. On the other hand, when have electronics, fashion, and architecture ever emphasized practicality first? Design in these disciplines tends to favour style over substance.

What do you guys think? Do we need more products designed for the Canadian realities? Or will we be prying your iPod Touch out of your cold, frost-bitten fingers?

If you’re interested in Canadian design, you should take a look at The Canadian Design Resource, which I’ve been enjoying immensely over the past few months. It features a daily post on a diverse mixture of things designed in Canada.

Photo of the Rideau Canal by Flickr user Robbie1