Do you use spatial organization?

Today Anand and I were talking about how people manage files on their (computer) desktop, and we were wondering — how many people actually use some sort of spatial organization? By “spatial organization”, I mean that the physical location of the icons on the desktop carries some sort of meaning for the user. Since he created BumpTop, there’s no doubt that Anand wants to treat his desktop like a physical workspace, putting similar documents close to each other, even creating piles. On the opposite side of the spectrum, here’s what my desktop looks like: 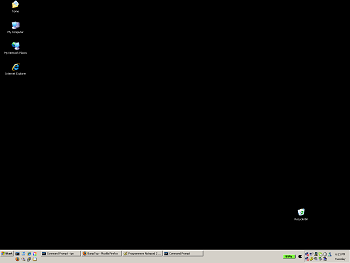 One reason I don’t use spatial organization on my desktop is that I don’t like to see the clutter there all the time. Another reason is that Windows doesn’t give you the features to encourage this kind of approach. Maybe if I had BumpTop, my approach would be different.

There are pros and cons to using a real-world metaphor. It’s great to leverage a person’s existing skills, and metaphors can be a great way to help people learn and understand new concepts. As the Spanish philosopher José Ortega y Gasset said: “the metaphor is perhaps one of man’s most fruitful potentialities. Its efficacy verges on magic.” On the other hand, metaphors can be limiting: they discourage understanding the true nature of a new object or concept, and they prevent us from seeing better ways of doing things. In The Anti-Mac Interface, the authors mention an early tractor design that was steered using reins: “the tractor was steered by pulling on the appropriate rein, both reins were loosened to go forward and pulled back to stop, and pulling back harder on the reins caused the tractor to back up.”

I wanted to put the question out to everyone: do you use spatial organization on your computer? Why or why not?