My posts have been pretty Mozilla-centric for the last couple of weeks, and with Firefox 3 Beta 1 having dropped today, I see no reason to change that.

I’ve been running it for a couple of hours now, and here are some of my first impressions of the UI changes. For a more thorough review, check out Ars Technica.

First off, based on the concepts Alex posted about last week, the look and feel is going to change a lot before the final release. So, from a UI perspective, Beta 1 might be more properly considered to be an alpha.

I’m happy to report that they’ve fixed the problem I wrote about last time. Previously, when a user selected to open (rather than save) a downloaded file, it was possible to save changes to the open document. That was a Bad Thing, because it the file was actually in a temp directory, and it meant that you could easily lose the changes that you’ve made. Now they’ve made downloaded files read-only, so when you try to save your changes, you will be prompted to save them to a different file in a more permanent location.

One of my long-time annoyances with previous versions of Firefox is that every time you log into a site, you’re presented with a modal dialog asking, “Do you want Firefox to remember the password for this site?” The modal dialog has been replaced with a nice, unobtrusive question in the notification area. Better still, if you ignore the message, it disappears after a few seconds. Slick. Jef Raskin would be proud.

One of the major new features of Firefox 3 (which I wrote about previously) is Places, which is unified system for dealing with bookmarks and your browsing history. In support of this, Firefox 3 introduces the concept of “starring” pages, much like in GMail. In theory, this is a very lightweight way of bookmarking pages. When you star a page, it you will see a star beside it when it appears in the autocomplete list, just like this:

I had hoped that the history sidebar would also show the star for pages that you have previously visited, but that doesn’t seem to be the case (yet).

I mentioned the new “awesomebar” in a previous post. In short, it’s a modified autocomplete mechanism for the location bar. When you start typing, it tries to match the URL or title of previously visited pages. It’s also adaptive, based on the previous selections you have made.

So far it has worked nicely for me. I’ll have to use it for a bit longer before I can declare it to be “awesome”; for now it’s just the not-too-shabby-bar.

The Not-so-good, aka the Don’t-forget-it’s-just-a-beta

Unifying bookmarks and history seems like a good idea, but I think that the front-end for the Places functionality needs some work. First of all, the star control is way off on the end of the location bar, in an area I’ve heard referred to as “the lucky charms”:

Personally I think it would be better to put this control immediately to the left of the location bar, similar to how it’s placed in GMail. To me, it is sort of lost where it currently is; but maybe that’s because I never use the RSS and Go buttons.

After you star a page, if you click on the star again, you’re presented with the following dialog: 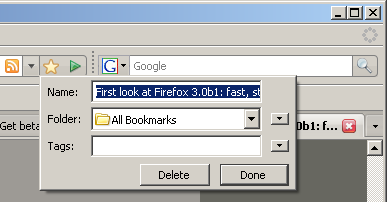 I had a few problems with this. First of all, there’s no indication that the tags field accepts comma-separated tags. Second, it was not really clear to me what the “Delete” button meant. It might be clearer if it were labeled “Unstar”. Finally, it feels weird to me that the star is not a toggle. It has two completely separate behaviours, depending on what state it’s in.

Overall I find the new UI for bookmarks to be very confusing. There are now at least three different ways to bookmark a page: starring it, dragging the icon to the bookmark toolbar, and the old standby, Ctrl-D. When you press Ctrl-D, it actually brings up the star menu, as if you had clicked once to star the page and then clicked again to bring up the menu. So, at least that clarifies that bookmarking a page is the same as starring it. But I really think it would be better if they didn’t use two different terms to refer to the same thing. In fact, make that three — starred pages are accessed through an item named “Places” in the bookmarks menu:

Overall, I’m pretty happy with the beta. Firefox 3 has got quite a few nice, new features, and the guys at Mozilla are working hard to make the user experience second-to-none. I think the Places UI still needs a lot of work — one of the great things about Firefox has always been its simplicity, and I wouldn’t want them to lose that. But I’m confident that Mike, Alex, and the rest of the user experience team will be able to address these problems in time for the release.