iPhone is the acid test for convergence 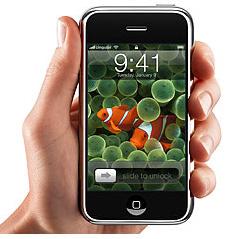 I’ve had enough time now to wipe the drool off my keyboard and formulate some intelligent thoughts on the iPhone.

The iPhone is remarkable in a few different ways. Obviously the physical interface is big departure from the traditional cell phone interface. I’m not sure exactly how I feel about the touch screen, but if anyone can make it work, Apple can.

To me though, the more interesting aspect is that it looks to be a make-or-break test for the theory of convergence. Yes, we’ve had camera phones and mobile web browsers for years, but they tend to be more gimmicky than useful. I think this is going to be the acid test: can we create a good multi-purpose mobile interface? And more importantly, will people buy a swiss army computing device?

The argument over convergence is an old one. Way back in 1986, Donald Norman argued against general-purpose user interfaces. In Less Is More, Bill Buxton argues that “divergence … should be the dominant model”. Most other usability experts seem to agree that from a usability standpoint, special-purpose devices are the way to go.

But mobile devices are a whole different ball game. Unless you’re willing to go the fashion-questionable route of belt clips and cargo pants, there are only so many devices a man can carry. Donald Norman suggests that we should carry multiple devices (presumably stashed in a murse, aka a European handbag) which communicate via bluetooth, and with a universal controller, “a Bluetooth device with simple buttons and a screen that connected to and controlled all the separate devices”.

In the end, it doesn’t matter what the experts think — the consumers are going to answer the convergence question. And I think the iPhone is going to be the precedent setter. Leisa Reichelt thinks it’s an automatic deal-clincher. I’m only a bit more skeptical. Touch screens have some well-established usability problems, notably the lack of tactile feedback. Even with the iPod, Apple backpedaled a bit with the four buttons, which were only touch-sensitive on the 3G models.

But I’m still betting on the iPhone being a winner. Get your popcorn — this is gonna be interesting.