Revenge of the Nerds: Cool interfaces for electronic music

Ever paid $20 to watch a guy bob his head while staring at a laptop? If you’re into instrumental hip hop or electronic music, you probably have. More and more DJs seem to be trading their Technics 1200s for Powerbooks. This means that human-computer interaction is becoming important to a lot of musicians. Here are some of the cooler music-oriented interfaces I’ve seen lately:

Reactable is “a collaborative electronic music instrument with a tabletop tangible multi-touch interface.” It’s based on a large multi-touch tabletop display, where the music is made by the placement and manipulation of physical objects on top of the screen. Each object represents a component of a classic modular synthesizer, and the components can be connected together by simply moving them close to each other. The best way to understand it is to check out the demo video:

Apparently Björk’s band used a Reactable at Coachella, and will be using it for the rest of the Volta tour. The creators must be pretty excited to have such a high-profile artist using it. (Damn, I should have gone to V-Fest last weekend!)

Monome provides another really cool alternative to hunching over a Powerbook. The concept is incredibly, beautifully simple — a reconfigurable grid of back-lit buttons: 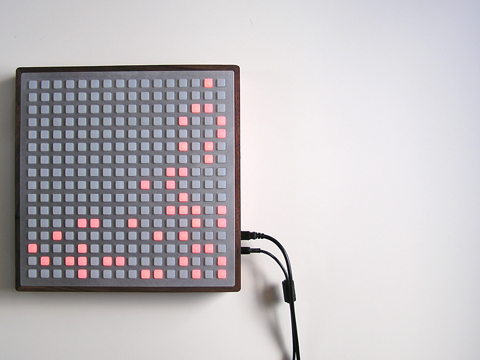 They’ve got some great sample videos showing the 40h being used as simple synthesizer, a sample cutter, and a drum machine. Again, the best way to understand it is to see it in action:

There are plenty of other videos on the site, including one of Daedalus performing on the 40h at the launch party.

The really cool thing about the Monome devices is that they’re not music-specific. They are completely reconfigurable, and based on open source software:

buttons can be configured as toggles, radio groupings, sliders, or organized into more sophisticated systems to monitor and trigger sample playback positions, stream 1-bit video, interact with dynamic physical models, and play games. button press and visual indication are decoupled by design: the correlation is established by each application.

And they’re purdy enough to make Steve and Jonathan jealous. I want one.

Roy Vanegas’ MIDI pick caught my attention at the ITP Winter Show last year. It’s a pressure-sensitive guitar pick that interfaces with Max/MSP to add effects to your guitar sound.

If you’re interested in these kinds of interfaces, you might want to check out the New Interfaces for Musical Expression conference.