Leah Culver, the lead developer of Pownce, posted the slide deck from her talk at FOWA 2007: Pownce - Lessons learned. I learned a few interesting things about Pownce:

By a freaky coincidence, these points happen to correspond to some links I wanted to share with y’all.

The Django Book, is a free, online Django reference. The book is still in beta (yes, they apparently do that for books now), and they’ve got a cool UI for commenting on specific paragraphs, and viewing those comments. Here’s what Chapter 1 looks like: 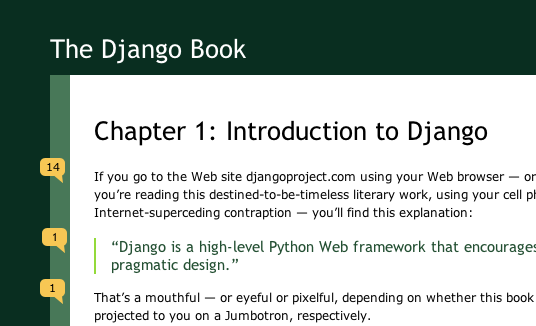 To view comments for a section, or to add a new comment, you click on the corresponding yellow dialog bubble on the left. For sections that don’t have any comments yet, a subtle, translucent bubble appears when you mouse over the margin.

Amazon S3 now has a service level agreement, guaranteeing 99.9% uptime. Lots of people have been raving about the Amazon Web Services arsenal, especially S3 (storage) and the Amazon Elastic Compute Cloud (aka EC2). It should be even more attractive to developers now that they have a guarantee.

Okay, this one’s a bit of a stretch.

Adobe AIR (Adobe Integrated Runtime) is a runtime environment for desktop applications based on Flash, HTML, and Ajax. It’s direct competitor to Mozilla’s WebRunner. If you’re interested in WebRunner and you live in Toronto, you might want to check out the Free Software and Open-Source Symposium at Seneca College later this month. Mark Finkle of the Mozilla Corporation will be doing a workshop on desktop-enabling web apps.