Via Etre, I see that Wacom has a new logo: 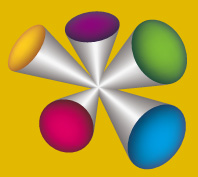 Weird. I’m not sure what it says to me, but certainly not, “a manufacturer of input devices like tablet systems.” Actually, it reminds me of two things: Q*bert, and the cover of Mike Oldfield’s Tubular Bells. Far out.

Apparently the logo was designed by Wolff Olins, who also designed the controversial logo for the London 2012 Olympics:

I do like that logo, but it looks more like the cover of the new Rapture album than a symbol of an international sporting event. Oh well, at least there’s no reflection in there anywhere.